There are plans, and then there are PLANS. Our Christmas plans fell into the latter category. One of our first learning experiences about Germany was that they do Christmas in a bigger way than even we holiday-frenzied Americans were used to. The exact phrase that has been used to describe it is “Christmas on steroids.”

We planned to kick the advent season off in fine style by heading to Köln (aka Cologne) for the opening of the Christmas markets with some lovely friends who are living in England. Christmas markets are one of the most distinctive aspects of Christmas in Germany. Basically, every town holds a Christmas festival, complete with vendors selling their gift-wares, decorations, food, and drink, and there seems to be a common theme of some children’s activities (ferris wheels, train rides, etc.), as well. Some of the markets are bigger (and badder) than others, and the ones in Köln are supposed to be pretty over-the-top (that’s right, they don’t just have one Christmas market, they have SIX, each with a different theme and focus). I suppose we could have taken our first clue that this Christmas season was going to be a wee bit different than we’d planned when we had to scrap that plan because both Mike and I ended up capital S-sick. Boo. So… we visited the local market in Aschaffenburg the next week and a good time was had by all.

I had to break out the über-serious ski jacket to deal with all of this coldness. It was still pretty intense. 4 layers under that coat, and still, that’s the best facial expression I could come up with. That fear you see in my eyes? It was real. And no, I really couldn’t get my arms to lay any closer to my body. I may as well have turned around and stuck my tongue to that pole there on the right…

The entrance to the Market… Decorated with toy soldiers, lights, garlands… they had it going on! 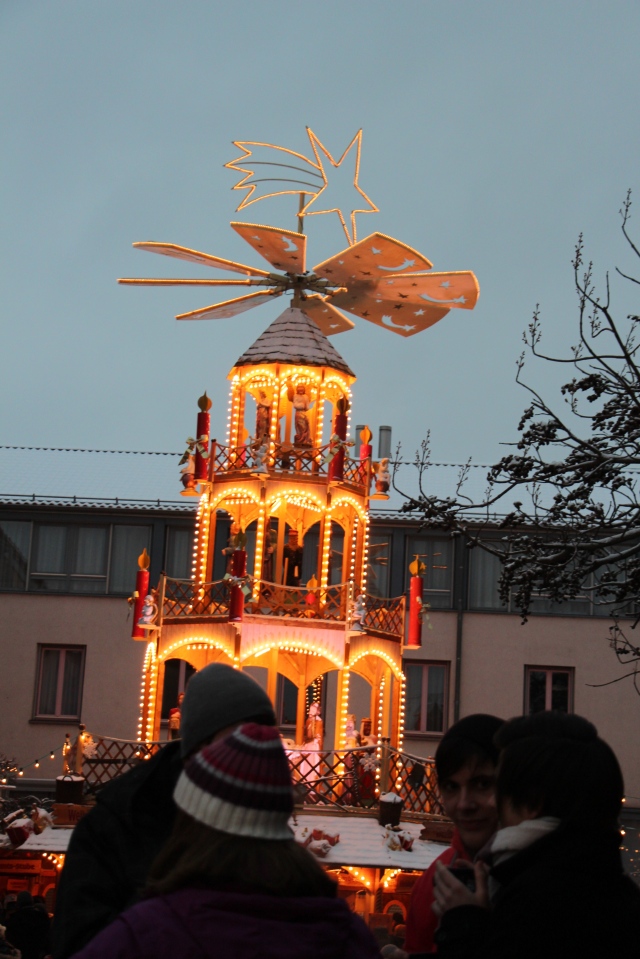 A miniature train (named the “El Paso;” I really couldn’t even begin to speculate on that…) which kids ride on, set up to go around a town like a Christmas-ized Aschaffenburg. Very cute!

Ferris wheels and tasty treats ensure that everyone stays in a merry mood.

A broader view of the market… Picturesque!

The castle, nestled in snow and firs. So beautiful!

The river scene, as the sun is almost done setting. Very wintry, very pretty, and it was very windy as we took that picture.

I missed a grand opportunity for a picture when we went to get our Tannenbaum… we bought it from a guy selling trees in a small space a few blocks away, and then Mike carried the tree all the way down the street on his shoulder! We take the whole vintage trend very seriously, and definitely lived it on that one. Of course, we also didn’t bring Christmas decorations with us from Atlanta, so I (who don’t have a crafty bone in my body, really) got busy making Christmas decorations. It was a spectacle, to be sure…

On this fine day, we also had no hot water, which meant no heat, which meant that any excuse to have the oven on was a welcomed one! 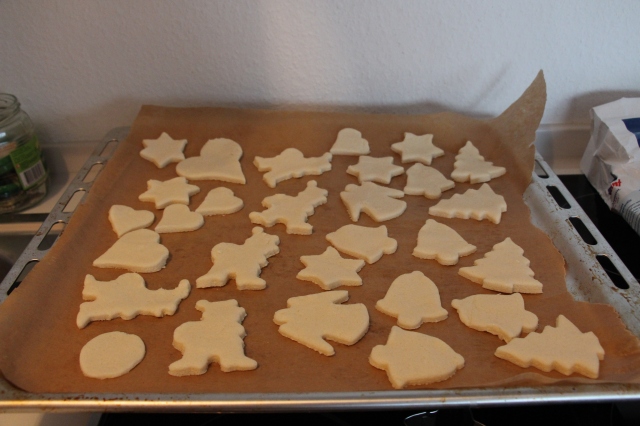 Notice the exquisite application of the glitter… 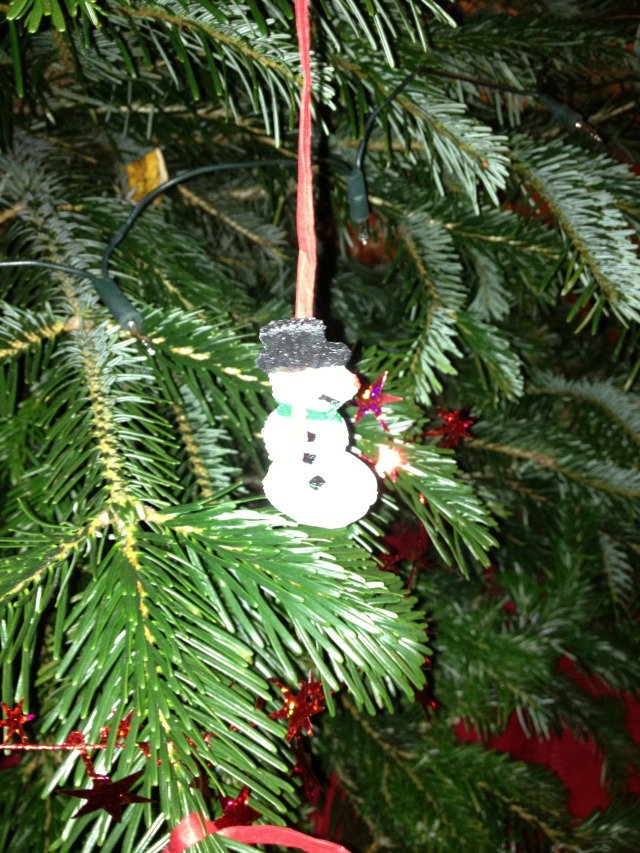 Such a creative use of stripes on this fine rocking horse… (not to mention that lovely glitter!) 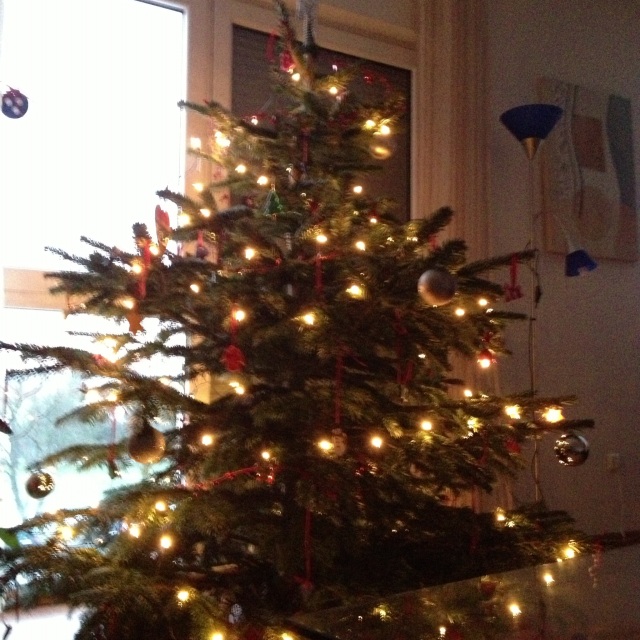 It turned out rather lovely, though, all things considered.

We also had grand plans for a cross-Germany tour when my family came for the holidays. They planned to arrive the week before Christmas, and we were going to head South and then East and go to Heidelberg, Nürmberg, and Berlin, hitting the Christmas markets and cool sites along the way. Instead, both Mike and I are back here in Atlanta, gathering around a Christmas tree that we bought for 30% off because it was getting down to the bottom of the tree barrel (but really, how many people can say that they’ve bought and decorated live trees on two continents in one season?). The most important thing about the Christmas season, though, is that it reminds us that we are waiting. Instead of focusing on waiting on arrivals and departures at the airport, or train schedules, or tour arrangements, we are eagerly awaiting the time that we will all be together in whatever feels most like home. As it turns out, that isn’t going to be in Germany this year. Nothing against Germany, fair readers, but… My sister, (who I now will say was saved both by Bon Jovi. I won’t even say that Bon Jovi may have played a part in this anymore, I am certain of it; many of the complications she’s had stem from the fact that her body was sick of working with defective equipment, and I can not bear to think of what it would have been like for her had this not been taken care of when it was, and that was definitely due to Bon Jovi and a whole lot of divine intervention) and by Travis the Terrific, which is a story for another day), is still recovering from her open-heart surgery to repair the hole in her heart in the ICU at the same hospital she and I were both born at. It is nice, in a way, to think that the hospital that saw her into the world is the same place that is giving her a second chance at the next 35+ years. Instead of waking up and opening presents, our Christmas Day is more like all of the other days in Advent; we sit and wait, first in the waiting room, then in the ICU area with her, waiting, biding time, for her to emerge with new life and vigor and the joie de vivre that is just underneath the surface. I’m thinking it is going to be a grand Epiphany…

I do hope that you and yours are close, and that you have had a very peaceful day, filled with love and family and hope. And, “God bless us every one.”

4 thoughts on “A Christmas Carol”