Hi Y’all! I am happy to report that after several near death moments, I am no longer convinced that I am in fact, sure to die, of my germiness (or the medication given for my germiness; that stuff is ROUGH). I’m not yet willing to rule it out, but I no longer count it as inevitable. I even managed to not go back to bed after taking a shower this morning. Sadly, this is also related to the loss of our “living room bed.” At some point (time has lost all meaning for me in the last week and a half) Mike moved his side of the bed (we have 2 individual mattresses within one wooden frame) into the living room (probably for his own comfort, not mine, but…), and I began to see it as my daily accomplishment to move from the bedroom bed aalllll the way to the living room bed (probably not more than 10 or 15 feet). But, Mike took the living room bed away, and remarkably, I’ve stayed alive (and out of bed).

I am, however, obviously still delusional. I thought, “I’ll just go through those pictures from Rome and type that blog up all nice and pretty today.” Ummm, yeah. About that? WE HAVE SO MANY PICTURES FROM ROME! I’ve gone through over 600 already. And you know what? I made it through our first full day in Rome. (And, that was the day we were at the Vatican, and there were lots of parts that we couldn’t even take pictures of! EEK!!)

We took the High-speed train from Venice to Roma, and that was a fun little adventure all on it’s own. Taking the train is more fun than I had imagined before living here. And taking the train in Italy is more attractive than anywhere else I’ve ever taken the train. Double win!

We arrived in Rome in mid-afternoon, and hiked to our hotel. This was also a novel experience for us as late… Not because we aren’t used to walking, though (believe me, we’ve got that one covered!)… It was so warm, I actually began to glisten! YES! Believe you me, I have NEVER been so happy to be hot in all of my life (and you may never hear it again, but I was happy to take it while I could).

After settling into our hotel (also known as dumping our bags, grabbing a snack, and leaving), we figured out that there were a few things on my list of things to do that were open late enough for us to enjoy. We headed off to the Capitoline Museums (Musei Capitolini), which was a perfect opening to our time in Rome. The Capitoline Hill is one of the seven famous hills of Rome, and it was the citadel of the earliest Romans. The museums include buildings designed by Michelangelo and houses works and archeological remains as far back as the 17th Century B.C.! WAY back! It really was pretty darn impressive, if I do say so myself. I found myself tremendously humbled while we were in Venice with respect to my art knowledge. I am obviously rather ignorant when it comes to art, even of the masters. I couldn’t believe that I’d never heard of this museum, though, until I started looking into what we “should” see while we were in the Eternal city… It really is almost embarrassing. You’ll love me anyway, right? 🙂

In the middle of Piazza del Campidoglio. The rider on the horse? Marcus Aurelius. This is a replica – the original is in the museum.

Walking up the Capitoline Hill

Just inside, where you can buy your tickets. Take a gander at the Roman feet!

The next day, our first full day in Roma, was the one I’d been most excited about. The Vatican Museums (SISTINE CHAPEL)! I’d arranged for us to take a guided tour of the Vatican Museums (13 museums in 14 different palaces, and the museums just celebrated their 500th anniversary), and that may have been the best decision I’ve ever made, honestly. We really liked our tour guide! Bruno forever! Seriously, when I grow up? I want to be as smart as he is. He kept the pace interesting, and told us all kinds of back story and history, all while making it relevant to us. He obviously loves the place, and it rubbed off. It was completely incredible. The popes, y’all? They live large and in charge. (Or at least they used to; we didn’t hear any wild and crazy stories about the more recent popes, but back in the day? Jeez.) And the Venetians sure aren’t the only looters in Italy. We learned about how this pope had a thing for animals, and that pope had a thing for maps, and the other pope had a thing for Ancient Egypt. Seriously, it has been said that these museums have most of the important masterpieces from the Renaissance, and I can’t argue with that.

The double helix staircase… it was even cooler in person.

As we began our tour of the Vatican museums. 🙂 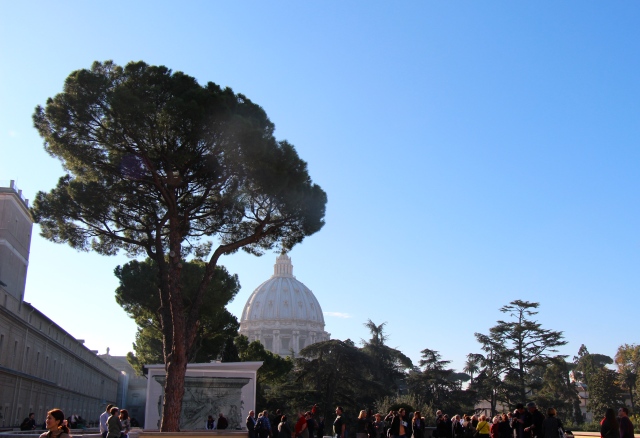 Bruno was quick to point out the similarity of many Roman landmarks to those we, as Americans, are certain to be familiar with… 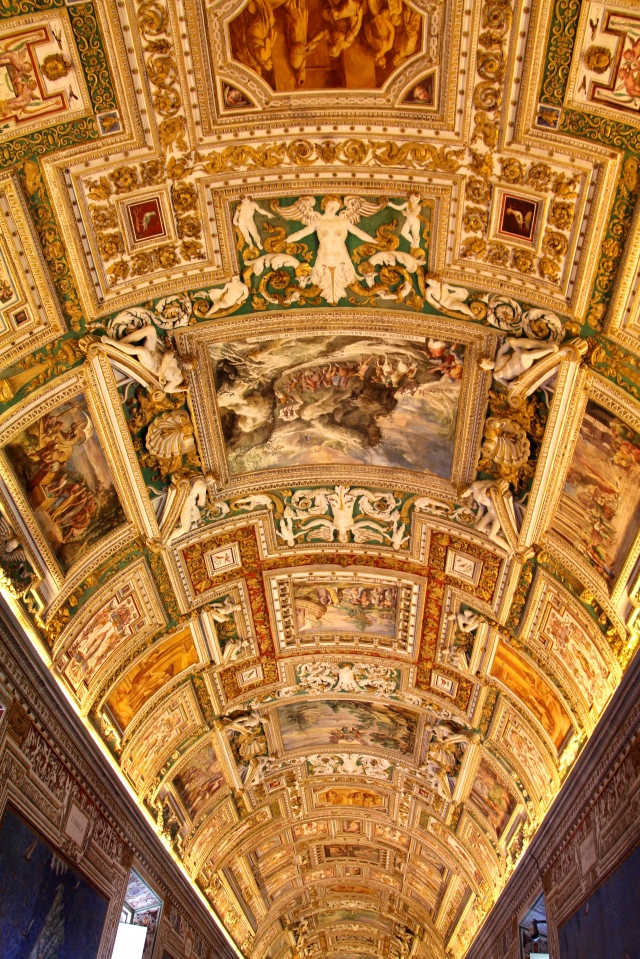 The ceiling of one of the rooms in the Vatican… sigh… suddenly, a discussion of flat or popcorn seems inadequate.

There is another wing that mirrors this one, and it was designed to look like arms giving a hug. Isn’t that friendly?

We saw the Swiss Guards (and got to see the changing of the guard), and then entered St. Peter’s Basilica. Have you been there? It is incredible. It is the 2nd tallest dome in the world (apparently, they built one in Africa 2 m higher just to have the distinction), and it is gorgeous. Words really can’t even begin to describe it. 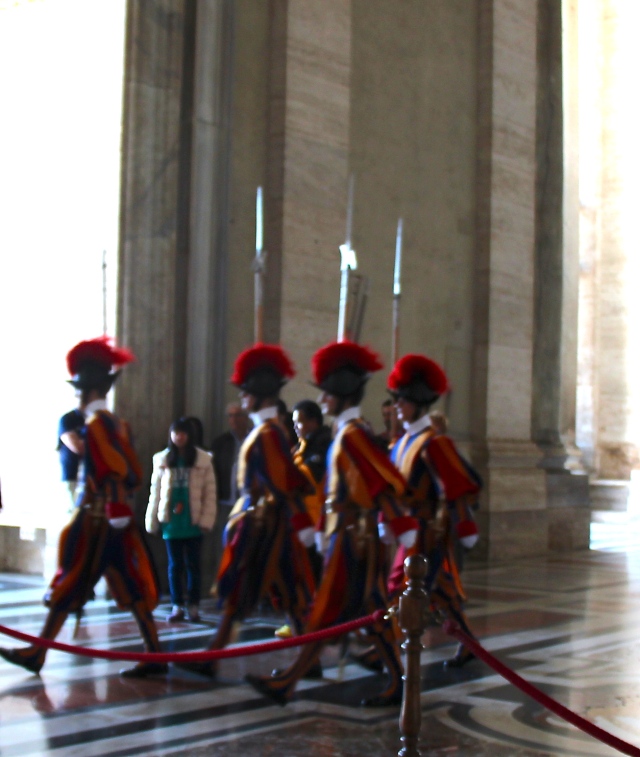 Swiss Guards marching along… (not the crispest photo, but they were there and gone so quickly that it was a challenge to get set up for!) 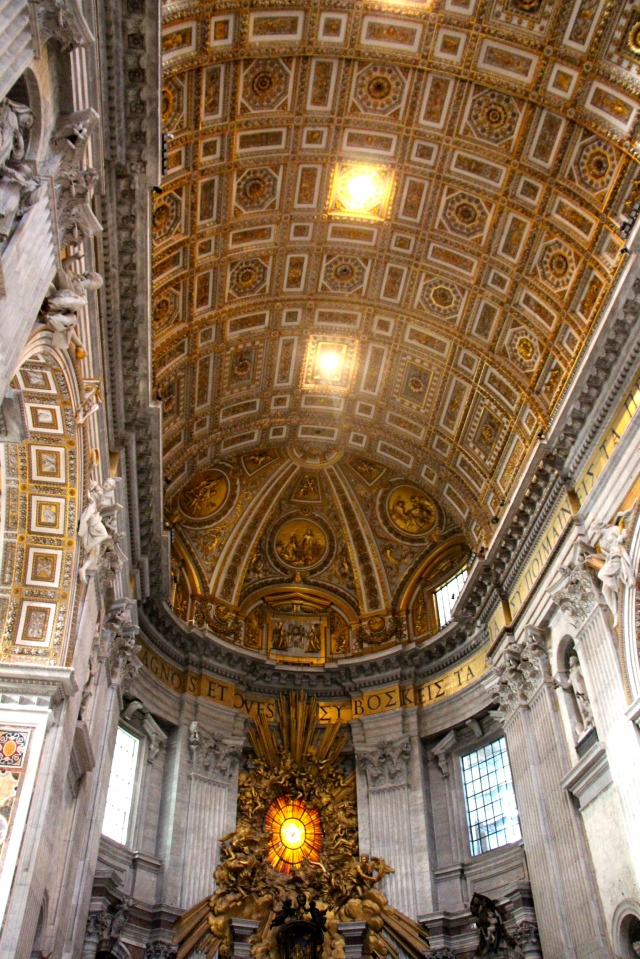 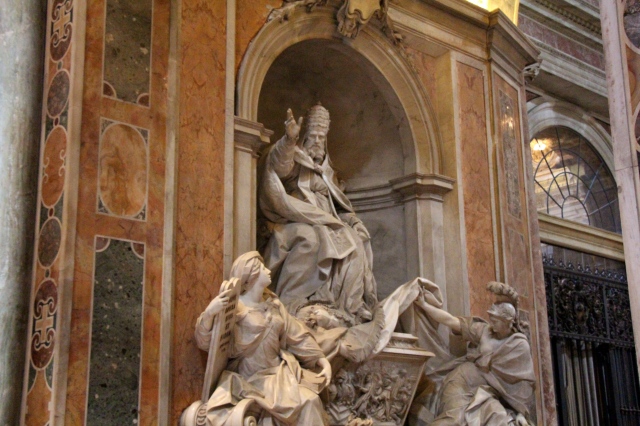 As if all of that wasn’t enough, Bruno also offered us his (handy dandy) guide to food in Rome. Seriously? Yes, yes please. After we had that, we never looked back (although should we ever find ourselves in Roma again, you can bet your sweet bippie that we will be taking his guided tour of food in Roma!)! I would highly recommend it, in case I haven’t been clear on that… 🙂

After Bruno left us (sniff, sniff) at the end of our tour, we climbed all the way up to the top of St. Peter’s. One of the stair cases was so small – literally the wall begins to lean into you so you have to walk tilted towards the center – that the only thing that they had room to use as a support is a piece of rope. It was… interesting. We climbed and climbed and climbed (and this was after taking the elevator up 5 stories), but it was totally worth it. Such a view! (I kind of wished, though, that there was a giant slide that we could have taken from the top. I guess that probably wouldn’t have fit with the whole vibe they had going there, but it would have been pretty awesome.)

Doesn’t this almost look like it must be a model? I promise, real deal! 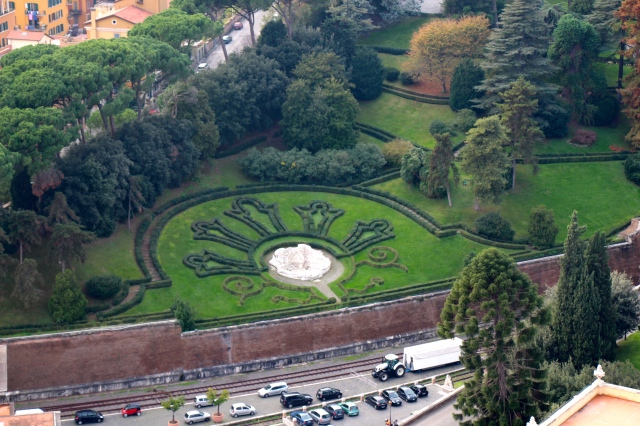 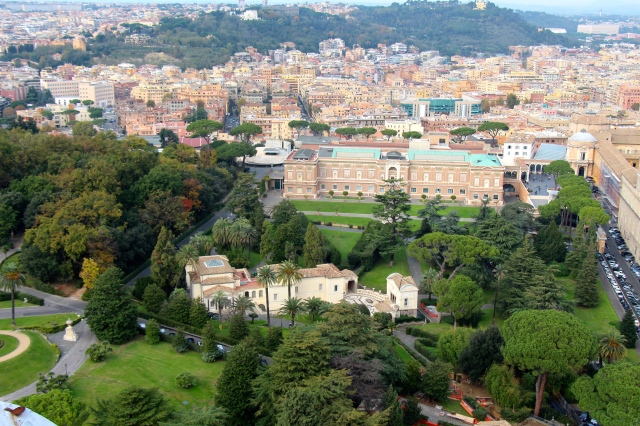 After that, we went to the Piazza Popolo: 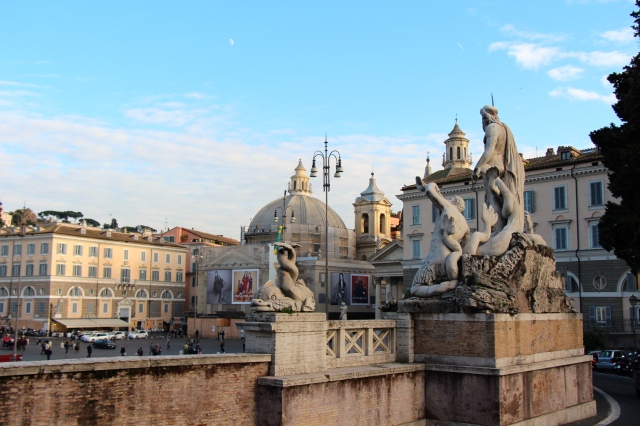 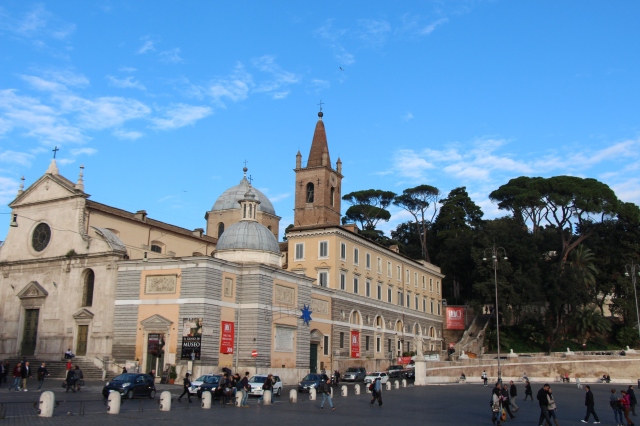 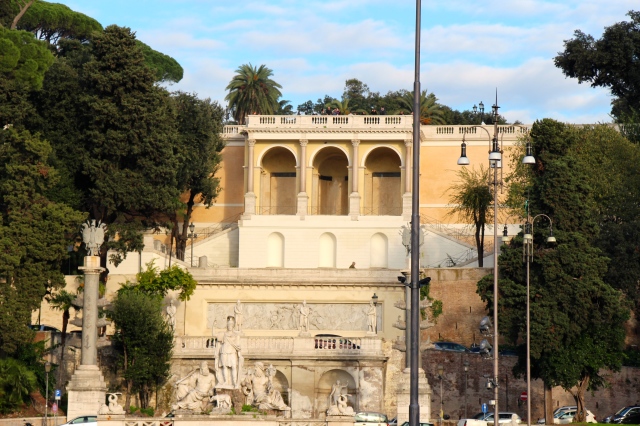 And to the Spanish Steps:

Those steps are not the Spanish steps, but they are in the area…

It is amazing to me how full of life Roma is. People were just hanging out, enjoying the sun. I don’t blame them a bit!

Bernini’s Fontana della Barcaccia (Fountain of the Old Boat) sits at the base of the steps.

The Scalinita (the Steps) are the widest in Europe, built to link the Bourbon Spanish Embassy to the Trinità dei Monti church.

And to the Trevi Fountain:

The Trevi Fountain (literally, the fountain at the 3 roads). The largest baroque fountain in Rome… and, of course, La Dolce Vita! 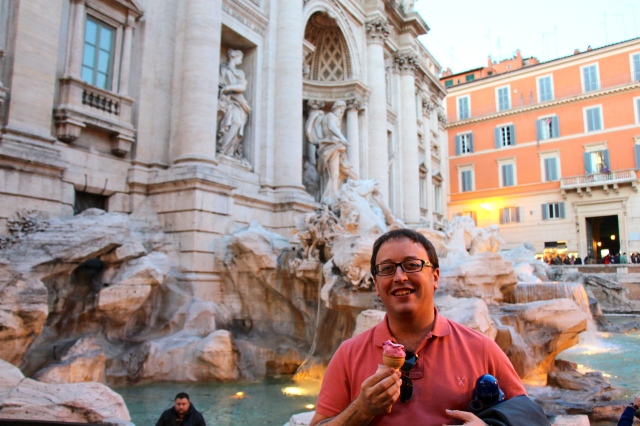 And of course, you can’t go to Italy without having some gelato! 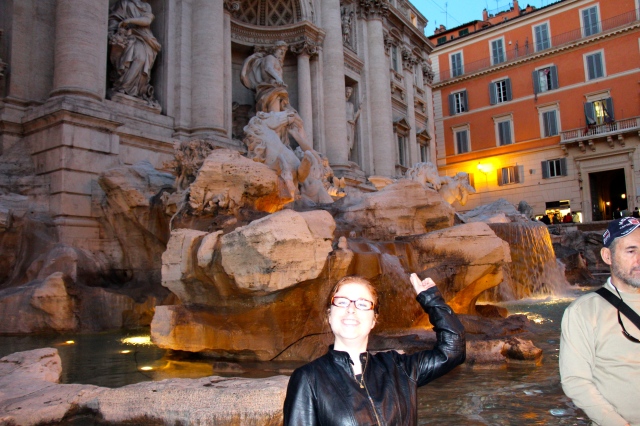 I’m sticking with the legend that says that tossing a coin in the fountain means you are guaranteed a return trip to Rome!

And to the Pantheon: 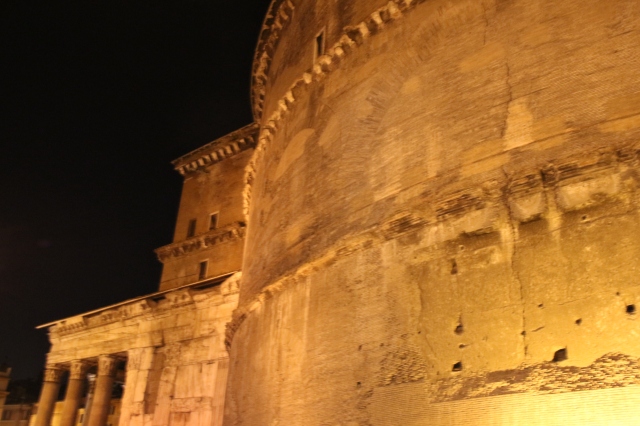 The exterior of the building was pretty incredible, too. It has been said that people aren’t sure if this building could be built today. It is an incredible feat of engineering and construction.

And to the Piazza Navona: 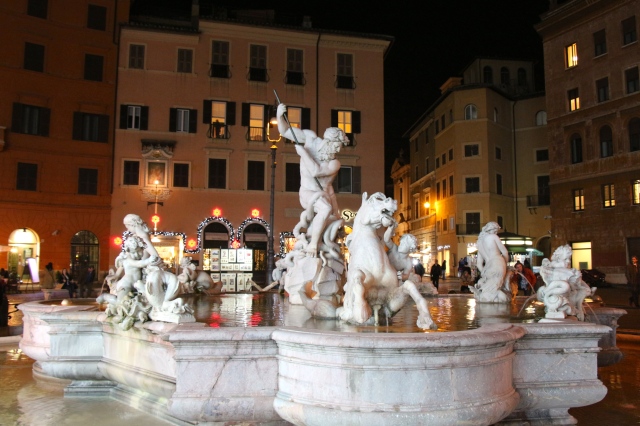 another day, another Bernini… sigh.

It was a busy, and wonderful day! I hope your’s is too!