You know what is fun? Whatever you think is fun (to each their own, I say) + this experience: Mike and I went to the Real on Friday (a Target-like store filled with everything from groceries to china to electronics to clothes, but organized in a less frantic fashion than at, say, Wal-Mart) and when Mike put my little treat up on the conveyor belt at the cash register, 2 women (who didn’t know each other) both turned around and appreciatively eyed what we were getting. It’s a look I’ve worn before, so I know it well. This look isn’t quite jealousy (these looked to be lovely ladies not bitten by a green-eyed monster at all), but it is appreciation of the I’m-putting-this-on-my-Christmas-list variety.

What was I getting you ask? Prepare your Christmas list! Christmas, like daylight savings time ending, comes early in these parts! 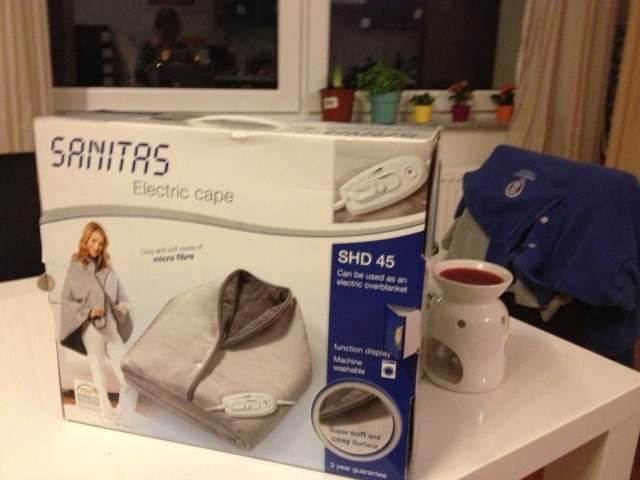 Just what I’ve always needed and I just didn’t know that it existed….

An electric cape! (It is a lot like an electric blanket, but it is for all of those times when you want to be warm and cozy but not actually in bed.) I first eyed it a month ago or so (when shopping for the rote lampe), and have been day dreaming about it ever since. I can pretty much guarantee that all of my posts from here on out are going to be happier as a result! How can I not be happy when I am surrounded by the softness of the softest kind of fuzzy blanket with an electric heater inside? Impossible! And I can guarantee you that this thing is going to be on me every waking moment inside the apartment. We’re even looking into getting an extension cord so that I can roam freely about the entire apartment with the cape on. SCORE! (and I’m counting that as a score for you and for me! Isn’t this a lovely arrangement: when I win, you win! Carry on with your happy Sunday, people… carry on…)

And you may enjoy carrying on with some more photos from our trip to Brussels, placed here, again, not for your jealousy, but for your appreciation! 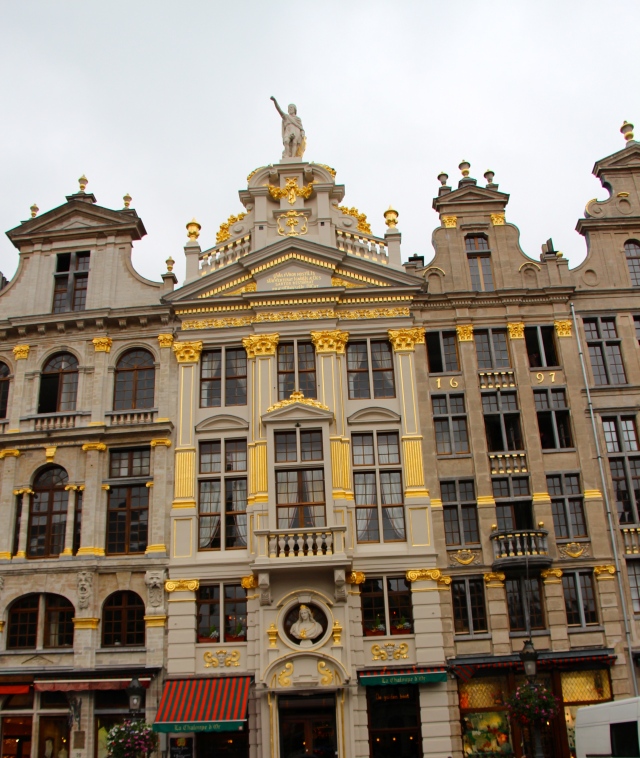 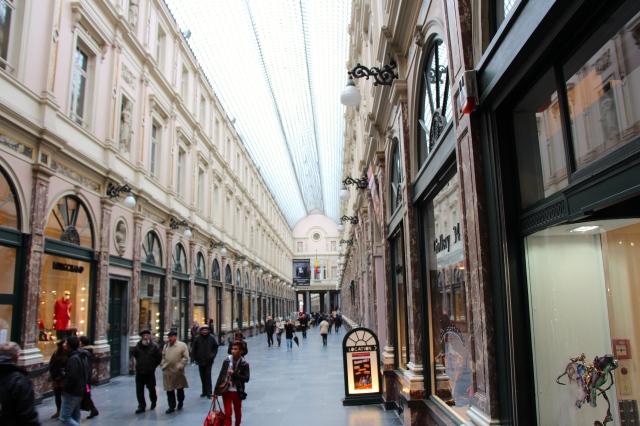 Things are so stylish in Brussels, even the Coke Light cans get Jean Paul Gaultier’s name on them…

Although this house is now a restaurant on the Grand Place, it once was a house where Karl Marx wrote “Das Kapital.” 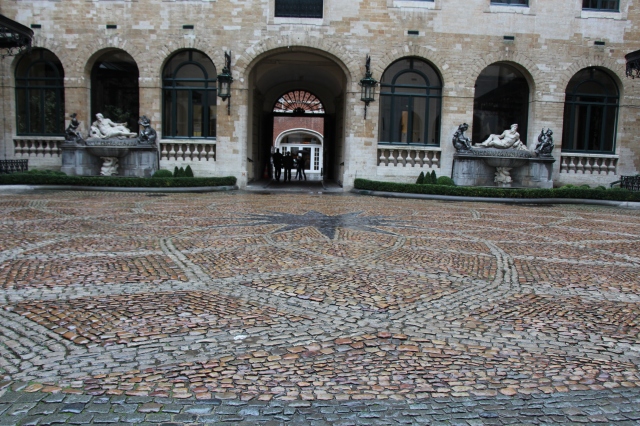 The courtyard inside le Hotel de Ville; the cobblestone star you see here is the point from which all distances are measured in Brussels.

A replica of the statue of Everard ‘t Serclaes; touching this statue is supposed to bring you good luck (and if you touch his arm, it is said to ensure your return to Brussels). This guy is important to the Belgians because he led a band of patriots over the city walls to defend Brussels from the Flemish in the 1300s. He was later assassinated because he defended the city against the Lord of Gaasbeek (Dutch), and I guess the Dutch must have won. Later on, though, the Lord of Gaasbeek’s castle was destroyed in revenge for his killing of our dear Everard.

Cool clock over a road tunnel going through the heart of Brussels. 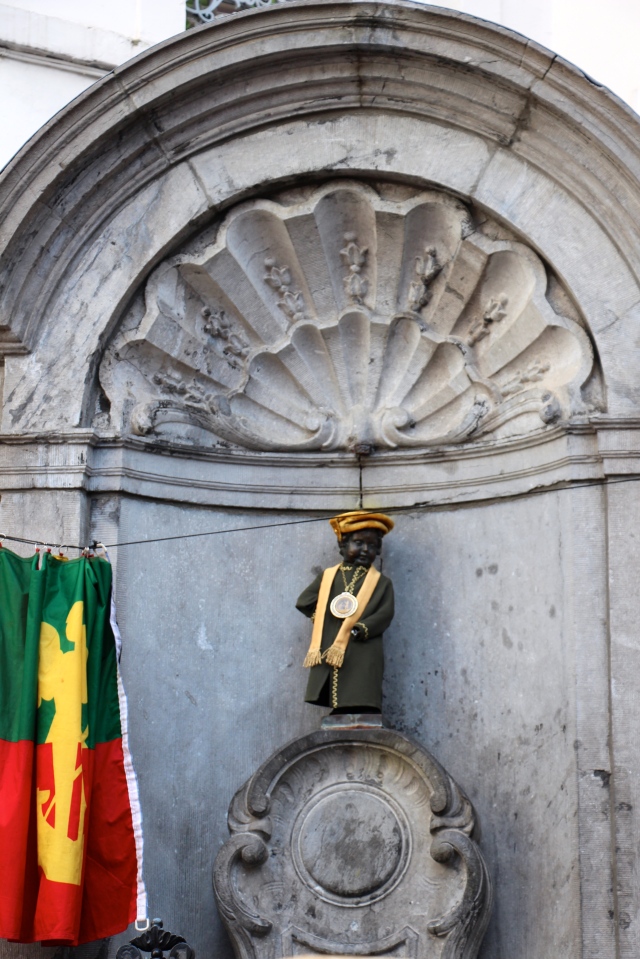 We stood amid the crowd for about 45 minutes waiting for the grand unveiling of the Mannekin Pis (literally translates to “Little Man Pees”) wearing his new clothes. They change the outfit he wears regularly, but we totally lucked out on getting to see the new outfit. In preparation, they poured a bunch of little cups of beer for distributing to the group, and then a bunch of people wearing the big people version of his clothes came out and all toasted the Mannekin Pis in all of his peeing glory. It was, actually, very exciting. There are a bunch of legends about the Mannekin Pis, but basically, it is a statue that has been around for several hundred years (although it has been replaced a few times because it has been stolen or marred; the original sits in the Maison Rois at the Grand place). One of the legends is that there was an army in the name of a 2 year old “Lord”, and they had the baby in a basket as they went into battle. They hung the basket in some trees so that they could see the baby and be motivated by their “leader” and the leader then peed on them and they lost. Another legend (and the one usually told to tourists) is that their was a wealthy person visiting the city when is son went missing. After a search party was formed and sent out throughout the city, the young boy was found doing his business in a garden. They wealthy guy then had a statue built and donated in his thanks for the people who helped find his son. You pick! 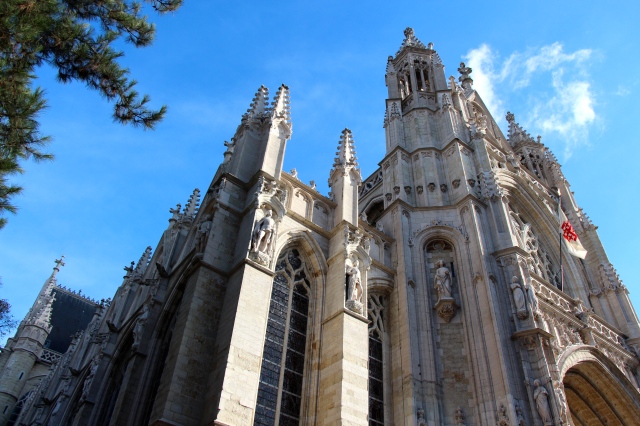 Close up of the detail at Notre Dame au Sablon

Le Petit Sablon: A small park next to Notre Dame with 48 statues representing each of the 48 medieval guilds in Brussels. 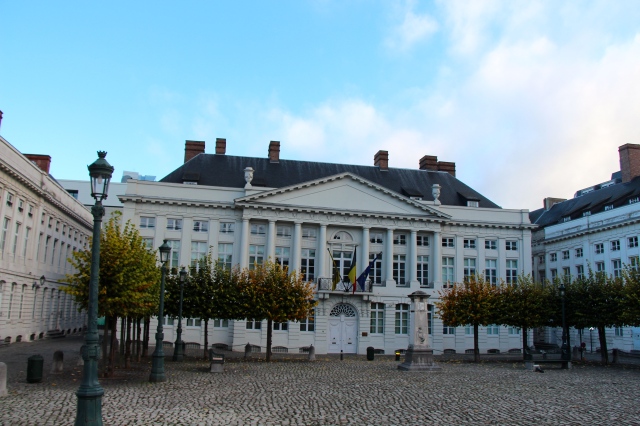 Place des Martyrs, memorializing the dead of the “September Days” of the Belgian revolution in 1830 (during which they won independence from The United Kingdom of the Netherlands). 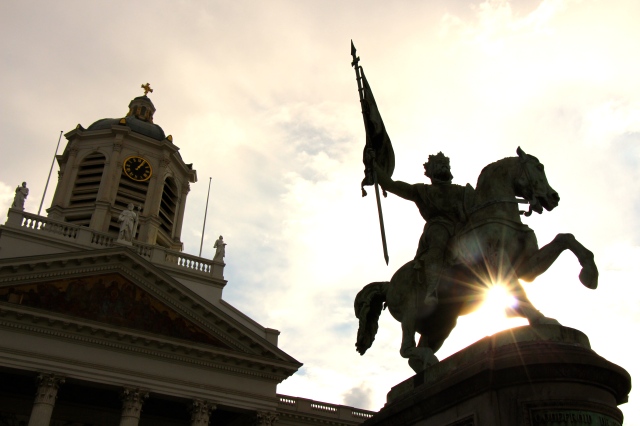 The middle of the Royal Square, where the Coudenberg Palace once stood.

The archeological remains of the dining room in Coudenberg Palace. Coudenberg was the royal palace (and the place to be) from the 12th century until a fire (which started in the dining area) burned it down in 1731. 40 years after it was destroyed, it was basically covered up when they decided to try to level the ground to build the new palace. None of this was dug up until 1986! The black you see in between the bricks and such? Ashes from the fire… Cool stuff! 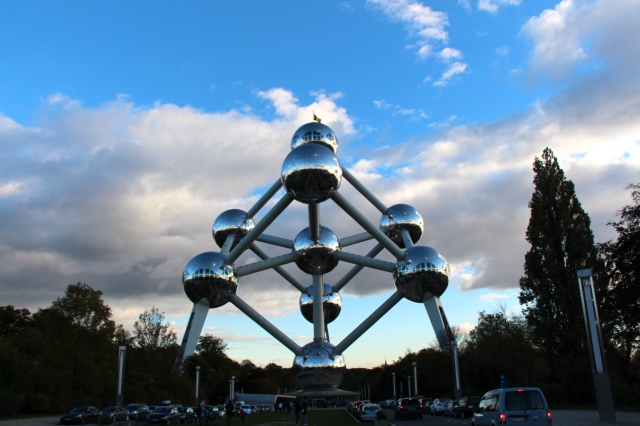 Approaching the Atomium, built for the 1958 World’s Fair. You take an elevator up to the viewing platform on the highest sphere. They will rent you other spheres… I’m thinking it would be a good place to have an office. What would you do with a sphere of your own? 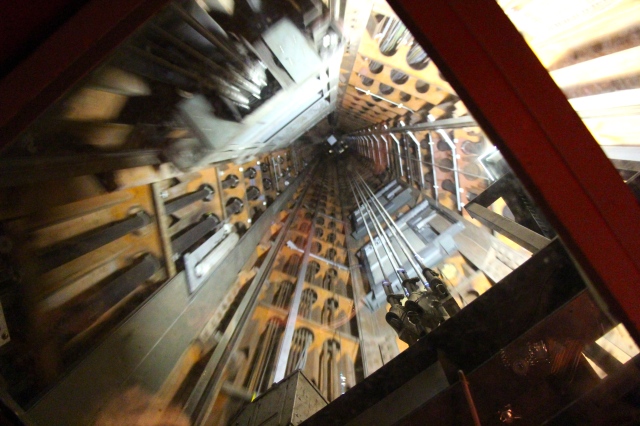 Zooming up the elevator to the viewing platform for the Atomium!

Mini-Europe from the Atomium. In case you don’t want to bother say, going to the real Eiffel Tower or going on a real canal in Venice, there is a clever amusement park where you can take in all of the miniaturized versions of the “must-sees” all over Europe.

St. Michael’s Church, from the outside. I think I posted this before, but I wanted to give some exterior context for the pictures that follow… 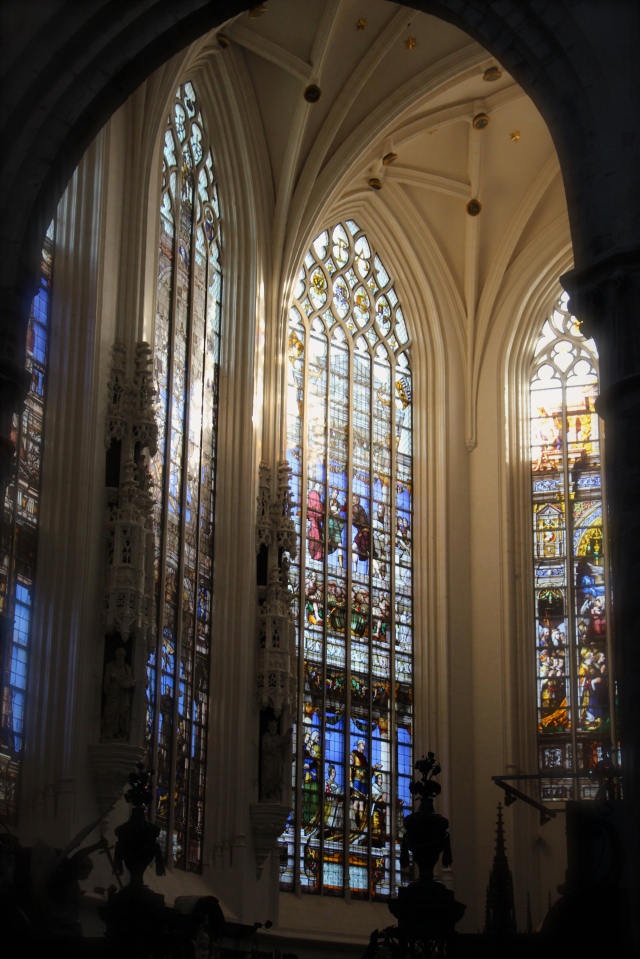 This area completely took my breath away… Completely. 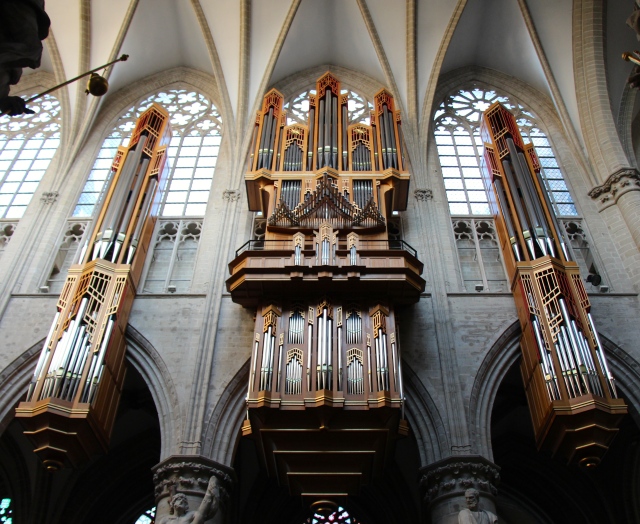 Some kind of organ, huh?

The steps leading up to the pulpit. It was absolutely incredible…

The widest triumphal arch in Europe

this is how trombones looked a couple hundred years ago. Progress? I think not. 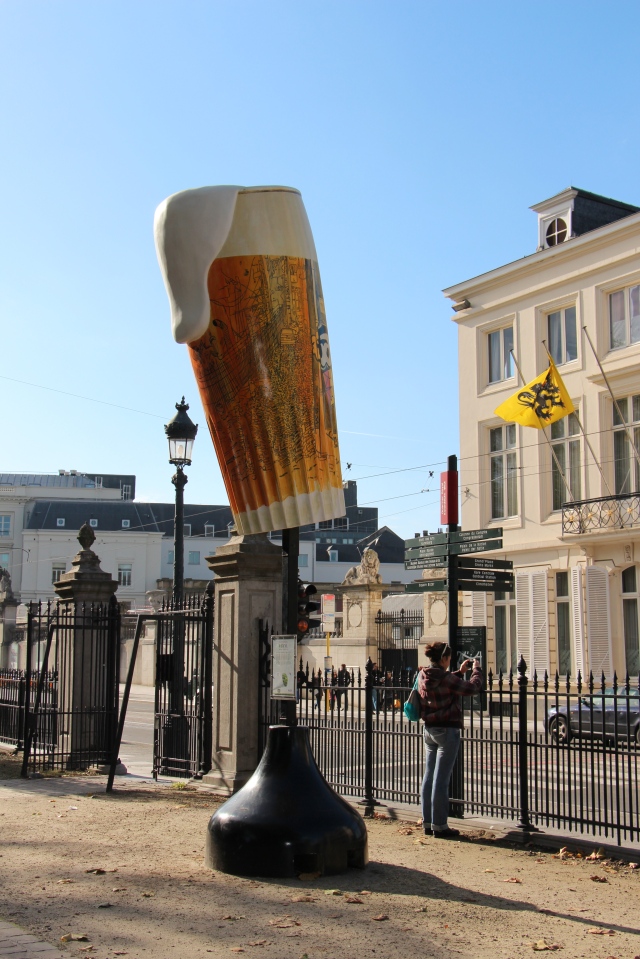 Our first (and last) “taste” of Brussels was in this park, with monuments to all things Brussels. First, of course, is a toast to their beer. 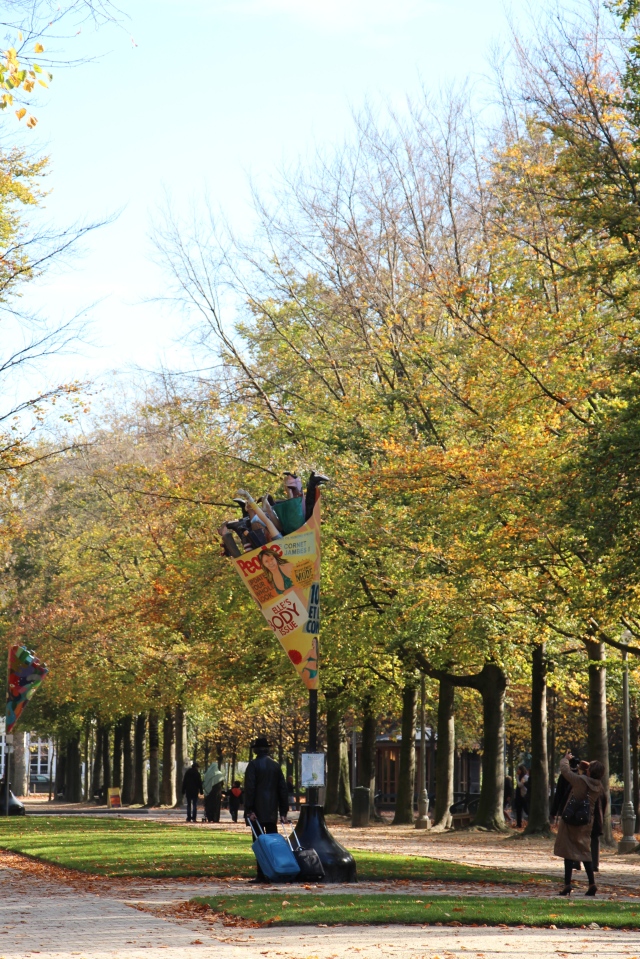 Belgium is actually the home of french fries as we known them (they are cut in the “French style,” but the Belgians came up with frying them)! Here’s to French fries…

And lastly to the mussels (which we did not partake in)… Fresh of the North Sea, they sure are proud of these guys! 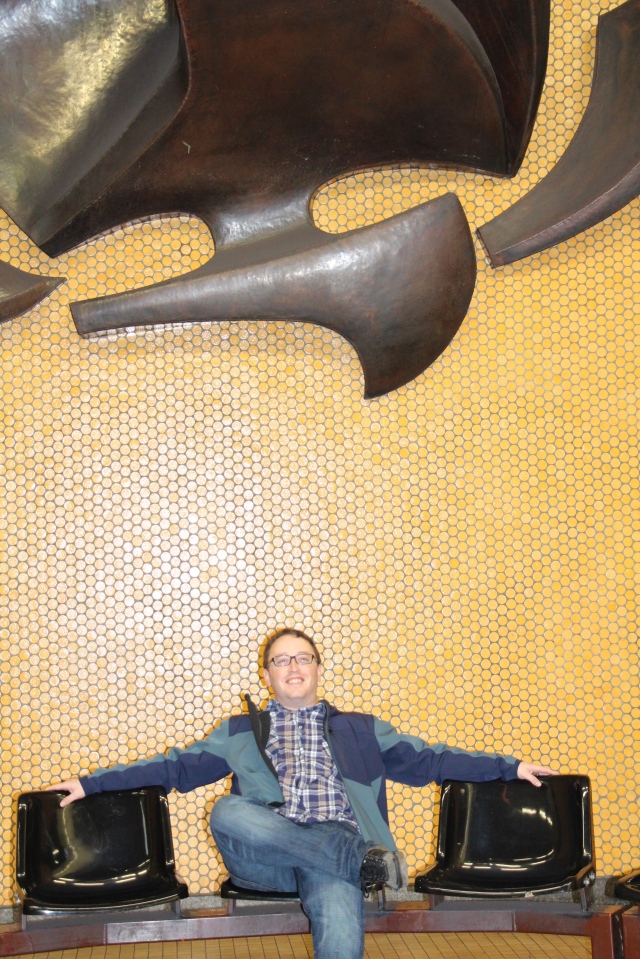 The Brussels underground/metro system is known for integrating art into their stations. Here’s Mike, taking it all in…

I must confess that the challenges I’ve had in posting this blog almost made that cape necessary:  our internet has gone somewhere around 1/3 the pace of a snail since Friday. I’ve been writing this blog since Friday morning… It is now mid-day on Sunday afternoon, and it is finally, finally ready to publish. Thank goodness for that cape, or I’d be downright grumpy by now. 🙂 I’m not!

7 thoughts on “Christmas in November and our Tour d’Bruxelles”