While we were in Berlin, we got off the metro at the wrong station. This ended up being a fortunate mistake, as we found both a very tasty lunch and a lovely market at the Hackesche Höfe (Hackesche courtyard; just so you know, whenever I try to pronounce that in my head, I end up with “Hacky Sack Huffa”).

Gnocchi along the Hacky Sack courtyard in Berlin. Tast-eee!! Italian food (pizza in particular) is extremely popular in Germany, but this was some of the best (I even had to take a bit before I took a picture!)… 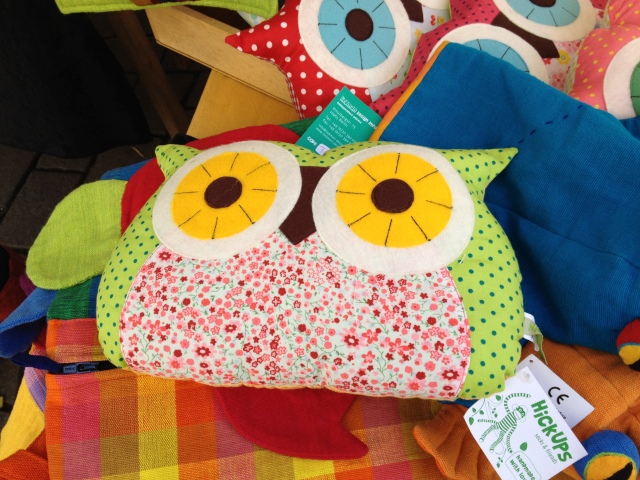 Owls are apparently an international fad these days, but I thought that these were adorable! 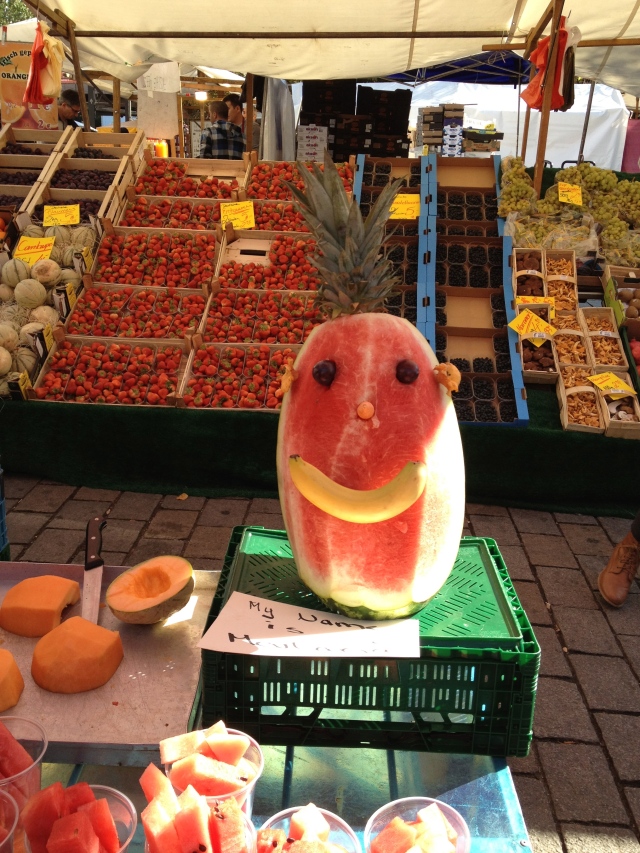 There is one photo that you are not seeing (on purpose) that actually introduces one of the points of difference in culture that I’ve learned. I saw a lovely stand of beautiful sterling silver creations and really appreciated the artistry and craftsmanship of the pieces displayed. I reached for my camera, not seeing the “NO PHOTOS” sign. You can imagine the rest – older German guy chewing out the American for rudely ignoring his sign (in German, of course, so I didn’t really understand most of what he was saying, but I sure got the gist!). I can totally understand his point – he didn’t want any cheap imitators getting models from his work – I get that, completely (I really just didn’t see the sign from the angle I was standing at). In any case, at many, if not most, markets, it is poor form to touch the merchandise, as well (I think that many people don’t mind the photographs, but perhaps I should ask about this as well). The no-touching rule includes fruits and vegetables at the bi-weekly market. If you would like a basket of tomatoes, the respectful thing to do is to inform the seller of your request and allow him or her to select which peaches/tomatoes/zucchini you will be taking home with you. If you find the earrings to be lovely, you would be most appropriate to state your appreciation, rather than touch them while exclaiming, “Oh, these are so pretty!” Take it from one of the Americans here, your hand will be physically removed from the item with a look that you will not quickly forget! While this makes sense and is just a difference, it is a significant difference that I had never even thought about! I don’t think to myself, “well, I’ll just palm all of the things that I like and they can suck it up if they don’t want my fingerprints on it.” I don’t even think about the number of things that I touch! It is a lesson in heightened awareness to not pick up the eggplant while expressing that I would like one.

While I haven’t actually seen a sign to this effect, it is still crystal clear.

Another thing is that in general, you do not enter someone’s office without permission. So… when I arrived at the “alternative practitioner’s” office on Monday, I opened the door and only saw other doors (one which said, “Buro,” which refers to the office, and another door that was open, but I couldn’t see anyone in it), I closed the door of the entry, but then just stood there. Um… hello? Anyone home? After standing there for a few minutes, I decided to read a bit in my handy-dandy Kindle until I saw signs of life.Of course, being a bit of a klutz, this involved shifting around my purse and my phone, which then came clattering to the floor. In light of the noise, the administrative person came to see what the ruckus was:  that’s right, your’s truly! Always ready to make an idiot of myself! Even while just standing in the middle of the hallway, trying to be culturally sensitive! I’ve found that people require less personal space, but are very protective of their environment writ large (e.g., being invited to someone’s house may take a really long time because it is a much more personal thing than having a conversation in a public space). It is interesting that there is such a contrast between their “personal space” (which they appear to have none; people have spoken to me literally all up in my grill without actually intending to be “in my face” in an angry way; or when walking along the sidewalk, people will regularly run me over, but it isn’t that they are being pushy, that’s just where they are going, and I happen to be in the same space) and their living or working environments.

And the nakedness. Let me not neglect to mention how incredibly comfortable people in Germany seem with nakedness. I will quote an email I received from a German friend of a friend of mine, when we were discussing the “sauna lifestyle” that many German seem to enjoy: “I should mention that saunas include nudity (ones own and others’) as some Americans tend to be a bit queasy on that subject :).” Add this to multiple other experiences: turning on the tv, for instance, at 9am: naked woman, naked man’s rear end on a tv show; going to the store to get my visa picture made: photo examples of the photographers work displayed: naked people everywhere; walking around Real (pronounce ree-All), Playboy and Penthouse calendars open on the end caps! Yes, yes I am queasy on the subject! (please note, photographic images DO NOT accompany this particular point of conversation.) I am not sure if I will get over this. As a therapist, I know that one of the best ways to overcome anxieties and discomfort is to face the issue head-on, be repeatedly exposed to the stimulus causing the discomfort or anxiety until the feeling diminishes. Unfortunately (I guess it’s unfortunate), I don’t know if I will psych myself into repeated exposure of this sort. Particularly, as the gentleman referenced in the above quotation, when it involves my own nudity. In public places. Nope… don’t see that happening…

We learned in our cross-cultural class to expect that timeliness is a cornerstone of German expectations. Hooray! That is one I can live with! I’m the if-I’m-not-10-minutes-early-I-feel-late kind of person, and I live in a world (and married to a man) that generally has NOT held this same value primacy. Now, I’m surrounded by millions (minus the Americans in our entourage) who agree! WITH ME!! Let me savor the moment, people, it doesn’t happen that often… On our 1st or 2nd day here, we were late to our registration appointment (which brings up another point; for all of their promptness, they don’t plan very far ahead! Just in the first week, we learned of dinner plans made by Germans oh, 15 minutes before they were scheduled to begin – and the restaurant was a 15 minute walk from our apartment!; the registration appointment I barely knew about and then, bam, I was late! :-() I have heard from others in our group that being late to school really isn’t an option based on the teacher’s reaction, too. (insert evil-sounding laugh… hahaha… they (meaning Mike) will conform to my way of doing things… Bwahaha… : love you, sweetie! :-))

6 thoughts on “Another Day, Another Market + Lessons in Manners/Customs Differences”